Please note, if an order within the Netherlands weighs more than 30 kilos, we’ll ship per pallet and we will charge different shipping costs, these costs will be calculated automatically in your shopping cart.

For pallet shipments abroad, please contact us for a customized quote via [email protected] or +31502053300.

Due to a decline in their numbers, and also because of their usefulness, Hornets have legal protection in many countries. It has now been shown that Hornets only sting in acute cases of self-defence (i.e. if they are themselves being directly attacked). Their sting is no more dangerous than that of a bee.

There are only two types of hornet in Europe. Together with the smaller wasps, they belong to the family of Vespidae which, like the different types of bees, are classified as Hymenoptera.

Although Hornets feed on nectar, fruit and sap, they feed their young with live insects and larvae, helping to maintain the balance of nature. If this balance is upset, it can lead to a massive increase in the numbers of those insects which are genuine pests to mankind, such as the Bark Beetle. Did you know that a normal swarm of Hornets can feed as much as half a kilo of insects - such as Horse Flies, Crane Flies and Caterpillars - to their young?

The Hornet Box, made from SCHWEGLER wood-concrete, has a number of major advantages compared with wooden boxes:

Siting:
Can be hung on the edges of woodland glades, the fringes of woodlands, where the wind has blown trees down, in clearings, parks etc., and especially among deciduous trees. If possible a secluded site should be chosen in order not to provoke or disturb the insects. The space in front of the box, in both the entry and exit areas, must be free of branches. If several boxes are installed, they should be at least 100 m apart to avoid fighting between the various colonies.

Positioning:
At least 4 m above ground level, with the entrance hole facing south-east to south-west.

Cleaning:
Must be cleaned out each April. Leave the old nest in place over the winter because it may be used by such useful creatures as Lacewings, Hornet Beetles, etc.

Occupation:
From May until mid-summer.

Add your review
0 stars based on 0 reviews
Insecten / Nestkasten / 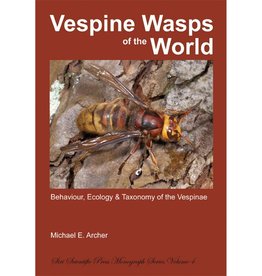 Vespine Wasps of the World
99,00
This book is an up-to-date review of the biology and taxonomy of the vespine wasps of the world
More