Sold out, probably not available until the end of the year.

The Song Meter Mini is an acoustic passive recorder for the long-term recording of birds, frogs and other vocal species. It is the successor of the popular SM4 from Wildlife Acoustics with similar specifications but then a lot cheaper and a lot smaller in size. A big difference, however, is that the Song Meter Mini can be operated via a smartphone or tablet with a BlueTooth connection. It also sends interim updates via the same connection to the free app on your device. You can download the "Song Meter Mini Configurator" app for free via Google Play or the Apple App store.

The Song Meter Mini has an optional second output so that you can also record in stereo.

The Song Meter Mini can record for many months on normal AA batteries: a total of 215 hours. If you use the 18650 lithium-ion batteries in combination with the Battery Lid, you can collect no less than 1,100 hours of data.

The Song Meter Mini is of course also compatible with the Kaleidoscope software for further processing of your data.

Advantages and disadvantages compared to the SM4 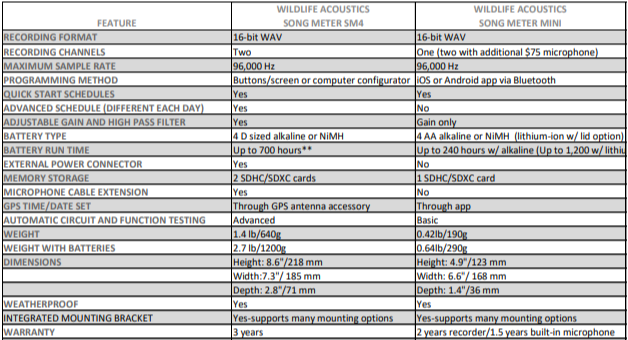 0 from 5Based on 0 reviews
Create your own review

There are no reviews written yet about this product..