Initially published in paperback in 2017, the second edition has been rereleased in unchanged form in hardback in 2019.

The Roberts Bird Guide (2nd Edition) has gone to great trouble to concentrate on, and illustrate, difficult-to-identify species and family groups such as raptors, warblers, cisticolas and waders. Special attention has been given to make sure there is far greater coverage of male-female differences and there are also many more juvenile illustrations.

Unlike all previously published southern African bird guides, this new edition will be scattered with informative photographs that are incorporated in the text pages and each plate illustration is augmented with an introduction. Apart from the approximately 240 plate spreads, the guide also has 12 photographic and illustrated double spreads that show head enlargements and other details. Plates are annotated far more definitively than other guides – highlighting key identification features, especially for difficult-to-identify species. Plates are richly illustrated with vignettes, which will make any birding experience more informative. 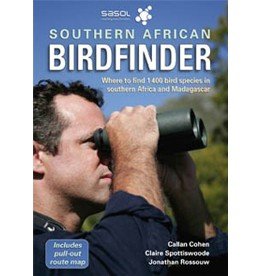